“I am proud to announce that Senate Victory’s 2022 slate of strong, diverse, women candidates and community leaders is officially one step closer to victory in November, with all 5 officially qualifying to appear on the ballot,” says Leader Book, who has hit record fundraising marks to help power these races to victory. “With the all-but-imminent reversal of Roe vs. Wade, these women’s voices are needed now more than ever in the Florida Senate – to fight back against the onslaught of extremist GOP-backed laws that limit Floridians’ rights and freedoms. While Republicans fail to solve the growing affordability crisis, Democrats like Loranne, Janet, Joy, Raquel, and Janelle are out there fighting for a woman’s right to choose, the right to be safe from gun violence in our communities, the right to fully funded public schools, to obtain affordable health care, and more. Our work to defend the Senate Democratic Caucus and grow our numbers has never been more critical, and we’ve never had such an incredible group of powerhouse woman candidates ready to lead.” 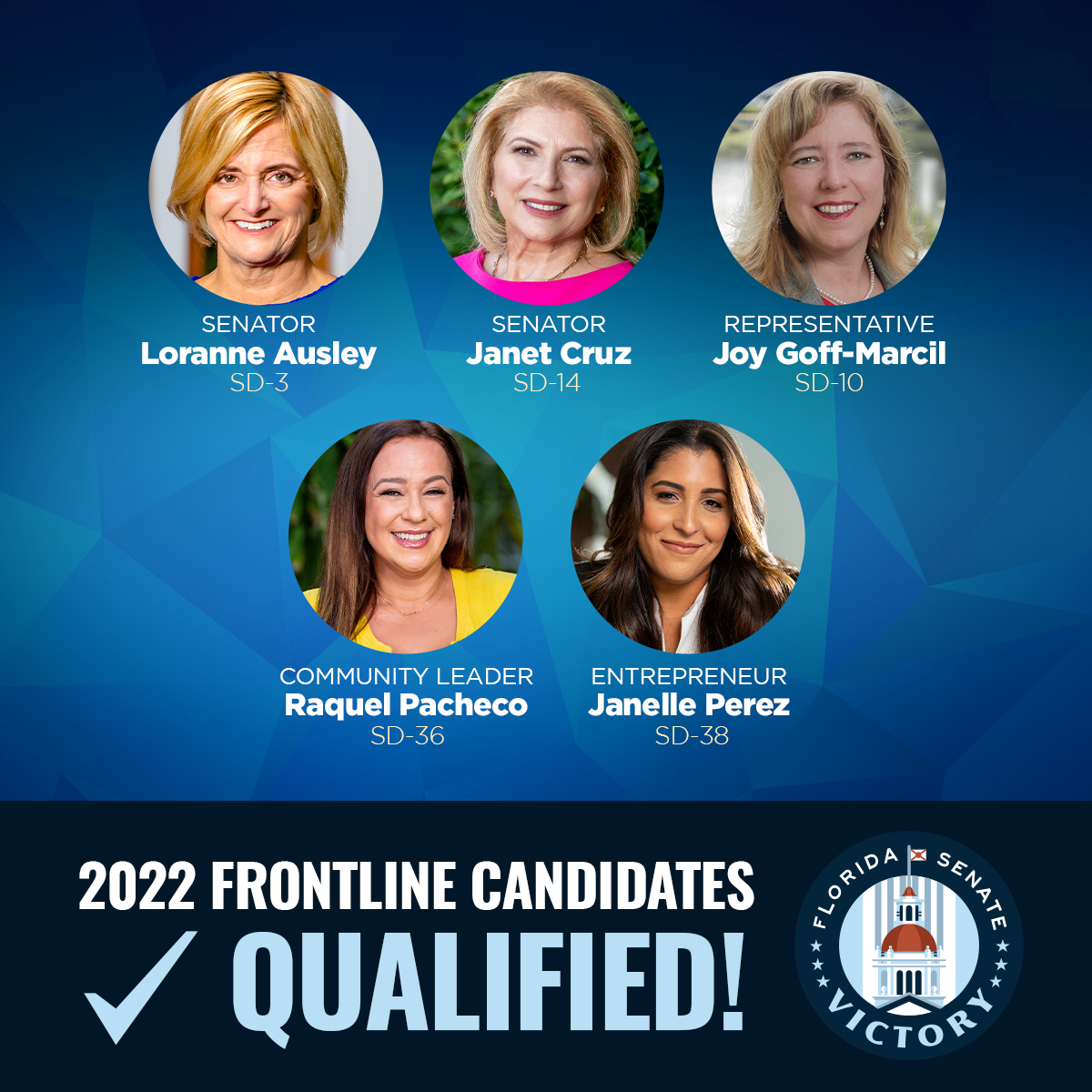 Learn more about these five “frontline” candidates who have what it takes to win in November:

Loranne Ausley has spent her career in public service advocating for children, the disabled and public employees. As an independent-minded, no-nonsense leader respected on both sides of the aisle, Loranne has always focused on finding common ground to help hardworking families here in North Florida. Since her election to the Florida Senate, she has gone to work on expanding access to broadband and child care.

Janet Cruz works every day fighting for the people of Hillsborough — fighting for tax cuts for hard working families, help for local small businesses, and good paying jobs. In her decades of service to Hillsborough, Janet has always stood with our teachers and students, fought to protect the land and water that make Florida so special, and defended the freedoms and rights of everyday people

An attorney and longtime resident of Maitland, Joy Goff-Marcil currently represents District 30 in the Florida House of Representatives. Joy got her start in public service after being elected to the Maitland City Council, where she earned the respect of her fellow council members who selected her as vice mayor. Joy has fought for Central Floridians’ local priorities and gotten results – standing up for health care, public schools, and the environment. Now, she’s running to represent her neighbors in the Florida Senate – to defend home rule and fight for Democratic values in Tallahassee.

Raquel Pacheco is a working mom, small business owner, veteran, and Miami Beach homeowner who understands the challenges facing South Floridians and their families. Like so many others, she’s fed up with out-of-touch Republican extremists who choose to fight culture wars instead of fighting to make things better for everyday people. As a refugee who came to the United States at the age 10, Raquel’s life story is living proof of the American Dream, and she’s running for the Florida Senate to make sure all Floridians have access to the same opportunities.

The daughter of Cuban exiles, Janelle Perez is a wife and mother at the forefront of the fight for equality. A cancer survivor and healthcare executive, she understands that we need to expand high-quality, affordable healthcare so no family goes bankrupt getting the care they need. Born and raised in Miami, and a graduate of Florida International University and The Johns Hopkins University, Janelle saw her parents become successful entrepreneurs after fleeing Castro’s dictatorship. Now, she’s running for State Senate to stand up for our values: freedom, equality, and opportunity.